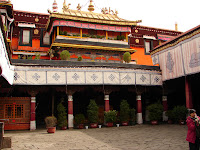 The story and setting of The Chiru of High Tibet may make readers want more information about Tibet. Who wouldn't want to travel to such a beautiful and mysterious land? But real travel to Tibet is expensive and arduous. Still, there's the possibility of "living room" travel, traveling by immersing ourselves in the pictures of and writing about a place. Of course there are many places to go for pictures and writing about Tibet. Here are a couple of my favorites:
Galen Rowell and the Dalai Lama worked together on a wonderful book called My Tibet (University of California Press, 1995). The photographs are by Galen Rowell, who was one of the trekkers in The Chiru of High Tibet. The text is by the Dalai Lama.

George B. Schaller made many trips to Tibet to study the animals who live there. George Schaller is also a wonderful photographer and his book Tibet's Hidden Wilderness (Harry Abrams, 1997), which focuses on the animals and the people of the Chang Tang plateau will whet any reader's appetite for more Tibet. 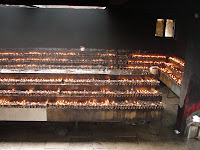 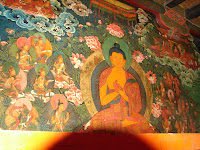 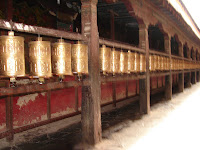 As the anniversary of my May/June trip to Tibet a few years ago gets closer I have the urge to revisit some of the places I feel as if I only glanced at. I would certainly spend more time at the Jokhang Temple in Lhasa, where I took these photos. It is the most sacred temple in Tibet. The goal of every Tibetan Buddhist is to go to Lhasa and go around the Jokhang. Some walk. Some prostrate themselves all the way around, that is, spread their bodies out flat along the ground, then scoot forward toward their hands, stand up and then spread flat again, a slow and painful way to travel, but a way that religious pilgrims believe expresses their devotion to Buddha.

The temple, though much changed over the centuries, has been on this same spot since the 7th century. King Songtsen Gampo built it to be a place for an image of Buddha brought to him by one of his queens.

Current visitors enter an open courtyard (pictured at the top of this entry). If we turn right and go under the balcony, we'll see a table filled with yak butter lamps (also above). We'd enter the temple itself off this courtyard. And we'd be able to stroll past many chapels of statuary and paintings of Buddhas other important figures in Tibetan Buddhism.

At some point we'd be ready for tea. Here's a recipe for tea that is similar to Tibetan yak butter tea:
(serves 1)
1 cup boiling water
1 tea bag (black tea)
steep tea bag in water for several minutes, then put tea in a blender or heavy jar with 1 tsp. butter and a couple of shakes of salt. Blend or shake for about half a minute. Pour into a cup or glass. Drink and think of far off mountains.
Posted by Jacqueline at 12:23 PM
Email ThisBlogThis!Share to TwitterShare to FacebookShare to Pinterest
Labels: Dalai Lama, Galen Rowell, George B. Schaller, Jokhang Temple, My Tibet, Tibet's Hidden Wilderness