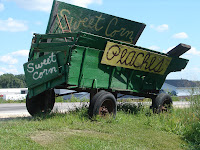 If you go north on Highway 13 here in eastern Iowa you’ll come to a small town called “Central City.” It’s not a city and it’s not too central, but it’s home to a couple of really nice county parks. Best of all, just off the highway, under a makeshift tarp there’s a man who’s put up some makeshift tables. And he sells Missouri peaches off those tables. Someone drives the peaches up from Missouri once a week, on Wednesday afternoons. And we Iowans come to buy those peaches because they are sweet and juicy and they just got here from Missouri. Those peaches are definitely “central” to peach jam, peach pie, any good peach experience.

When I stopped last week there were no peaches: sold out. But the peach man offered to deliver them to my house on Friday if I wanted a half a bushel. I declined, but now I’m feeling like it was a mistake. I’m going back.

What do peaches have to do with writing? Everything. Who is this man? Where did he come from to be selling peaches under a tarp in Central City, Iowa? What’s his story? He's been in the same spot since 1947. What story could we invent for such a man, who’s proud of the quality of his peaches ("They're picked the same morning they're delivered so they ripen on the trees.") and accommodating enough to deliver a half a bushel to a stranger? Who are we overlooking who’s just around the corner, just off the highway, next to some makeshift tables, who has a story we need to know?

And when you are finished with writing, or reading, or finding stories for the day you might want to make your own English muffins to go with your peach jam--or whatever jam you happen to have on hand.

Heat in a saucepan until very warm

In a large mixing bowl combine

Knead for about two minutes. Cover, let rise in warm place until doubled, about 1 to 1-1/2 hours.

Cook in n ungreased frying pan on or an electric griddle at medium low heat (275-300) for eight minutes per side or until brown (but not less than 6 minutes per side). Makes about 14 muffins.

Posted by Jacqueline at 11:33 AM
Email ThisBlogThis!Share to TwitterShare to FacebookShare to Pinterest