May 21 [in Lhasa]
Altitude headache, slowed, slowed responses, and if I move too fast or even walk upstairs a general bodily feeling that I've just done a bad. But it's worth it. The mountains are incredible. They look like eternity. And I can see Potala from my room. I'm eager for this day. We will go to the outside of Potala and to Jokhang, the Dalai Lama's summer residence [in the old days when the Dalai Lama lived in Tibet].

2:30 Jokhang is also the most sacred place in Tibet. Huge butterlamps, little butter lamps and the smell of incense. And up on the roof a monk talking on  cell phone.


The Jokhang looks like at least one heart of Tibetan Buddhism. There are three ways of walking around Jokhang: Nikkim--inner walk; Pakim --middle walk, and the outer walk. Jinpa took me on the inner walk. The inside is a central area with a series of small rooms around the end. Each room contains butter lamps and figures of deities or Buddhist masters. Butter lamlps burn everywhere.
There are prostrate pilgrims outside as well as those walking around Jokhang.

The Potala Palace is an amazing structure--a thousand room building that somehow looks like it belongs where it is. I love looking at it. Up close I can see it needs maintenance. But from a distance it is beautiful.


One of the odd things about travel in our time is that we can get so far so fast. I got to Tibet before my mind and body had time to adjust to the enormity of this trip. I was suddenly there: a new, exotic place that guide books, which I read conscientiously, had done little to prepare me for.  As I read my journal now, I wonder that I did so little speculation, so little rumination on what I was seeing or doing. But I think at the time it was all I could do just to record.

And perhaps that's ok. Perhaps that's the first thing I needed to do. Just get down as much of it as I could--and think about it later. 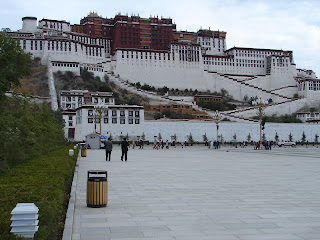 (Continued) Day in Lhasa, part 2
Posted by Jacqueline at 9:49 AM
Email ThisBlogThis!Share to TwitterShare to FacebookShare to Pinterest