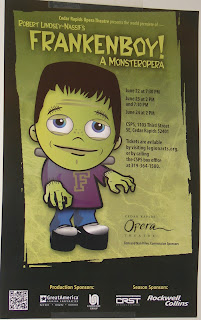 Last fall I visited Johnson Elementary School in Cedar Rapids to talk with some students about their experiences of bullying and do some writing about those experiences.  We planned to send the writing to composer Rob Nassif who had been commissioned to write an opera about bullying.

Well he's done it. And a couple of weeks ago the Cedar Rapids Opera Company sponsored a night of Rob talking about his composition. Rob said he aimed for a piece that would speak to both adults and children, that would have a little edge to it--the kind of "edge" that appeals to elementary and middle-schoolers, that would hold the attention of an "audience of about 500 kids sitting on a hard gym floor in broad daylight." So he invented "Frankenboy," which he says is "fun, scary, a little creepy."  Rob sang a couple of songs from the work. One of my favorite lines comes when Frankenboy's father is putting him together: "The most important part/ is a sweetheart of a heart." The songs we heard were wonderful.


Sharron McElmeel, librarian, educator, scheduler, events-coordinator, who loves and lives books, also heard Rob Nassif's presentation. Check out her take on the evening. Whatever we might say about it, we were in total agreement that the Cedar Rapids Opera Company, with their sponsoring of my day at Johnson School, commissioning Rob to write this opera, had started something, something big that would find its way into the lives of many students. 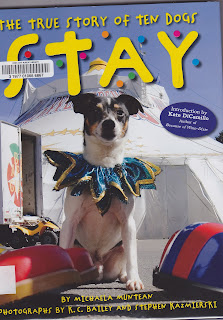 If I could, I would give each student who attends "Frankenboy" a copy of a new book I just found at the Iowa City Public Library. It's written by Michaela Muntean and is called Stay (Scholastic, 2012). It's the true story of Luciano Anastasini, a circus acrobat who took a bad fall and could no longer do his act. But he could imagine no other life. He decided to come up with a dog act. But he did not buy pedigreed dogs. He went to the dog shelter and found five dogs--a thief, a dog who ran into furniture and walls, a food-scrounger,"a schnauzer with a bad attitude," and a dog who dug holes. He decided he would not teach them to do unnatural things but learn what they loved to do and build his act on what they already loved. "As the dogs ran and played together, Luciano paid special attention to each of them." ...  His act became a huge success.

What more could any of us want than, as we run and play, someone who will pay special attention to us?  This is a wonderful book (with a heart-warming forward by Kate DiCamillo) that reminds us of the other side of the coin of bullying, the antidote to bullying. If only we could all be paid in special attention...