On the road to a new campsite


The Aru Basin is so quiet this morning a frying egg sounds like an explosion; the whirr of crows flying is sound enough to fill our space and a tent zipper is a loud statement of human activity. We have few places in the US of such quiet. It's cloudy here this morning. We can't see the peaks of all the mountains.


6:50 p.m. A long day. In the process of moving to a new campsite we lost our cook[who was following us in his own van]. The Aru Basin is vast with only paths for roads. It would be possible to spend weeks criss-crossing these valleys and mountainsides and never run across our cook. We spent about 4-1/2 hours stopping periodically to ask nomads. Some said yes they had seen a white Toyota. Some said no. Eventually a nomad on a motorcycle brought our cook to us.


If possible, the place where we are camping tonight is more beautiful than our first spot. We are nestled in a curve of glaciers. There's a clear stream that goes right past our campsite. On the other side of the stream a broad flat plain. To the south of the plain is Aru Tso. It is one of the most beautiful places I have ever seen. But the fact is I want to go home.... But I'm here now, one of the few Westerners ever to see the Chang Tang, so I'd better try to save as much as possible. The colors seem more intense here--blues bluer and just a few wisps of grass turn the landscape green. There are no nomads where we are tonight so the only sounds are the sounds we make.


We saw a lot of chiru today--all males. I think we may get to make more photos tomorrow. And I want to take a couple of shots of this valley.

I so well remember the day we lost the cook. He had poor vision and probably lost track of our van in the dust. But it was a long time in the car--and who knew if we would find him. At one point Jinpa said we would make our campsite, set up our tents, and he and Mr. Lee would go out and look for the cook (whom we only called "the cook.")   I was very glad that we didn't have to implement that plan. 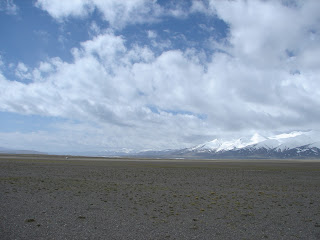 I think Rick Ridgeway named this place just right. I can't think of a better name than "The Big Open."  It's so vast our little encampment looks like a few dots. Jinpa, Mr. Lee, and I went for a drive this morning to find chiru. We found several groups of males. The females have already gone north for sure. But it's such a thrill to see the males running across the plains. Within 20 minutes of the time we parked the Land Cruiser they were gone so we  have good evidence of how shy they are.


It was one of the best parts of the trip just to sit there on the edge of a gully and watch the skyline. ... I have never been in a place so quiet and probably never will again. 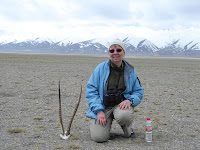 Jinpa and I took a short walk across the plains. We found the skull of a male chiru. It was touching to see the care with which Jinpa set it upright and put the loose horn on the skill "for another ten years" he said. Very possible. Not much happens to disturb things here.

4:50 p.m.After lunch I walked along the stream toward the lake and just sat down. It was my best day so far. The chiru came in fairly close. And I could just watch. I didn't have to worry about photos. They weren't that close. They run more than walk. I like to think it's because it feels so good to run across these vast plains. It looks like they'll be running full bore in one direction then turn on a dime and go in another direction. But the best was something I learned from Rich when we've been birding--just sit. I was just sitting and watching-- stopped on my way back to camp--and one chiru just started running toward me. I didn't move. He kept coming, so close I actually could take its picture. I got 3 shots!
He was so close I could see the mats on his fur.
...


8:15 p.m. The chiru have decided to let themselves be seen. I went for a walk after supper. They are everywhere grazing. Too far for my camera but I could see them easily with the binocs. Now I know their place, this basin between the two lakes. This is where I will think of them when I am back in Iowa. This is why I made this trip.

Nothing more to say. I am struck again by the beauty of this place. And again grateful that I had a chance to go there.

Posted by Jacqueline at 3:26 PM
Email ThisBlogThis!Share to TwitterShare to FacebookShare to Pinterest
Labels: The Chiru of High Tibet, Tibet