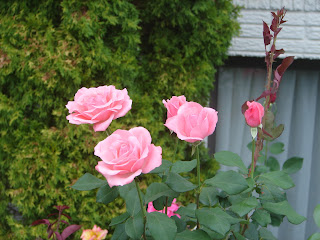 Driving home yesterday from a sumptuous "tea" (and Pimms Cup) put on by Claudia McGehee for writers, illustrators, and librarians, I happened to catch an interview with Michael Chabon on the radio. He talked so movingly in this ten minute segment about how he loves writing sentences that I want to share it here for anyone who might have missed it.

He's very touching when he talks about the effect on his life and self-image of four years of being bullied and hassled when he was about middle school age, being considered a "doofus," as he put it. It made a scar that he says he still feels.

Also important in the interview, especially for writers, is his commitment to writing. As you will hear, he writes every day from 10:00 p.m. to 3:00 a.m. That would be impossible for me; so I'm especially admiring, but I could extend my writing time. And just make a vow to write something every day... And it's a new week...


Posted by Jacqueline at 10:05 AM
Email ThisBlogThis!Share to TwitterShare to FacebookShare to Pinterest
Labels: Claudia McGehee, Michael Chabon, NPR