Drama in the Carriage Shed 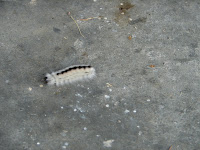 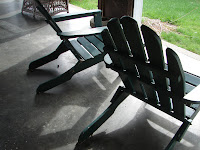 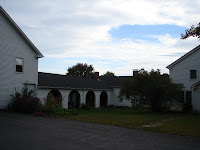 This week I have been with my mother at my sister Laura and her husband Bruce's place in Maine while Bruce and Laura are away on vacation. Their buildings include a remodeled 18th century farmhouse, carriage shed and barn. My mother likes to walk in the carriage shed for exercise. One afternoon we were out strolling and noticed a caterpillar entangled in a strand of spider web. We broke the web and thought it would crawl away (sorry, Charlotte). On our next round, back by the caterpillar under the chair we noticed that the spider had once again entangled the caterpillar. It hadn't been an accident, but part of the spider's design. We decided that we'd have to let Nature take it's course.

As we walked, we watched the caterpillar struggle against the strand of spider thread, curling and uncurling it's body. The spider continued to wrap its victim until the caterpillar couldn't reach the carriage shed floor. The caterpillar continued to struggle, twisting, turning, in its instinctive attempt to escape. We thought it was doomed. I went into the house--I know it's odd, it was just a caterpillar after all, but I couldn't stand to watch its inevitable end.

A few minutes later my mother yelled in, "He escaped!" Somehow the caterpillar got away. The caterpillar's fate hadn't been inevitable.

Afterward I thought about how caught up my mother and I had both been in the fate of this little worm, of which there are hundreds this time of year. We probably drive cars over them without thinking. We watch bluejays eat them and don't lift a hand. There was nothing special about this one. Why did we care so much about this little character? Was it the struggle? the seeming helplessness of the caterpillar? Was it that we were right there to see it?

I wondered what I could learn from this about writing, how could I make my character's stories more compelling? Does any kind of struggle resonate with readers? We all struggle against something. Is it enough to have characters who have a struggle? who yearn?

Perhaps I need to work to be sure that their struggles are important to them (what's more important than survival?). It would make my work stronger to have a "spider" of some kind in the story, some character or force for my character to struggle against. And I need to bring readers in close so they can be "in the same shed" as my "caterpillar."

Student writers, too, can learn from this caterpillar. When they are writing, they can look to their own lives, what do they want to do? What struggles have they watched? Perhaps it's only a struggle to ride a bicycle, or save money for a new basketball. That's enough. It's the moving toward the goal, whether it's survival, or winning an important race, that draws us in. And we want to feel the heat on the runner's back and the pebbles on the road. We want to be close enough to smell the sweat.

We went back to the Adirondack chairs in the shed the next day. No spider and no caterpillar. They had taken their drama to a different place. But I will think of them whenever I go into the carriage shed, and whenever I'm thinking about plot and character.
Posted by Jacqueline at 8:24 AM
Email ThisBlogThis!Share to TwitterShare to FacebookShare to Pinterest
Labels: character, plot, student writing, writing