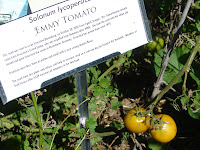 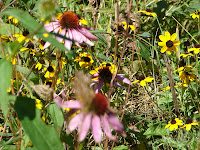 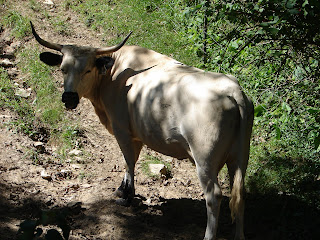 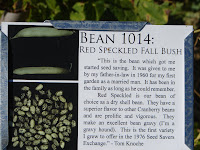 Seed Savers Exchange. Seed Savers Exchange is devoted to saving the seeds of heirloom vegetables. According to their website, "Their collection started when Diane Ott Whealy's terminally-ill grandfather gave them the seeds of two garden plants, Grandpa Ott's Morning Glory and German Pink Tomato, that his parents brought from Bavaria when they immigrated to St. Lucas, Iowa in the 1870s."

The Whealys decided to develop a repository of seeds that individuals had saved for generations. Most seed companies had narrowed their offerings to only a few varieties and the couple was worried that crop diversity would soon be lost. Seed Savers has thousands of varieties of vegetable seeds now and has also expanded from that original mission to establish a herd of White Park cattle, some poultry, and an orchard of heritage apple trees.

As we walked the grounds and looked at the once endangered White Park Cattle and the beans and squash, tomatoes, corn, and other vegetables and flowers grown from seeds carefully tended, saved in envelopes and jars, I began to think about saving, keeping intact.

Of course "saving" reminded me of George Schaller's, Rick Ridgeway's and others' efforts to save the chiru. We have an urge to wholeness, to keep our world whole, to go against the current of loss and destruction that seems so frequent a part of modern life.

In the middle of the woods at Seed Savers I began to dream up some discussion questions for kids. Questions about losing things. What have they lost? What have I lost that I regret losing? A book of poems that my daughter Sarah wrote and made and gave to me. (She only made three and I lost one. I feel its loss often); one of a pair of hand knit mittens made by a friend no longer living, an old six quart kettle that my mother used to pick raspberries.

And I thought I would like to try doing some writing with students about losing and saving. Could we write something about those lost things? What they stand for? Why we remember that we lost them? Can we think of anything we have saved from being lost or tossed? An old toy? A cherished piece of furniture?

Sometimes what is lost gets found. And those are the happy occasions. Things are looking up for the chiru. A recent note from George Schaller tells me "chiru are now on the increase." But sometimes lost is lost--like passenger pigeons. Perhaps that's why saving feels so good.
Posted by Jacqueline at 1:24 PM
Email ThisBlogThis!Share to TwitterShare to FacebookShare to Pinterest
Labels: George B. Schaller, Patagonia Clothing, Rick Ridgeway, Sarah Busse, Seed Savers Exchange