A connection to Tibet: barley bread 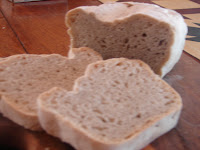 What's a blog on writing doing talking about a bread recipe? Well, there's the starting with something small and watching it grow, there's the waiting, the required patience, and best of all the nourishment of a good story or a good slice of warm bread. So enough with metaphors--today I want to talk about bread.

A few months ago I mentioned that I was working on a recipe for barley bread. I learned to love barley flour when I was in Tibet and have used it to make barley crackers (for cracker recipe, see blog entry for November 4).

Bread hasn't been as easy as crackers and I've too often ended up with a soggy gray mass that wasn't even good at the bottom of a soup bowl. But I think I'm getting close and want to share this recipe with you because it's so easy. I don't have to include any photos of kneading because you don't have to knead. You don't have to do anything except mix and wait (it's actually much easier than writing).

I started with Mark Bittman's recipe for quick no-knead bread.

Barley flour is not quite the same as bread flour so I made some changes. Here's the barley bread recipe:

Mix water and yeast in a large bowl. Add barley flour and salt. Stir in the 2 cups of unbleached flour.
Cover bowl with a place and let mixture sit for four hours. (Kids can do this part.)

After dough has sat in bowl for four hours, lightly grease a smooth surface. Turn dough out on greased surface. Fold dough in half a couple of times. Shape into a round loaf or an oblong depending on the shape of your covered baking pot. Let dough rest 30-45 minutes.

While dough is resting, heat oven to 450 degrees. Put a 6-8 quart heavy covered pot (can be cast iron, Pyrex or ceramic) in the oven. Let pot sit in hot oven for at least 20 minutes.

When dough is ready, carefully remove pot from oven. Lift dough with both hands and put it into the pot, trying for even distribution.

Sometime when you--and maybe some kids you work or play with-- just want to make something that smells good, is a little connection to Tibet, holds peanut butter or cheese, and doesn't take all day (or when you're looking for a break from pen and paper), try this recipe.
Posted by Jacqueline at 9:53 AM
Email ThisBlogThis!Share to TwitterShare to FacebookShare to Pinterest
Labels: barley bread