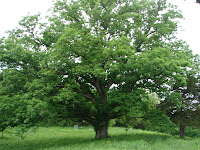 Our temperatures in Iowa have moderated to the point where it now feels good to be outside. And my thoughts turn to picnics. Some months ago I wrote about food stories--and I promised a few. Just to make good on that promise I want to share a picnic story.

When I was growing up on the farm we did not take vacations. Who would have milked the cows while we were off at the beach? And we didn't have much time for play, especially during haying season. But memory makes play out of the simplest of experiences. One summer afternoon my father was busy in the hayfield, too busy to come home for supper. My mother decided we'd have a picnic--with the spaghetti and meatballs she had made for our supper. We packed the usual--blanket, plates, silverware, lemonade--and of course the six quart pot of spaghetti and huge tennis-ball-sized meatballs, and drove from our home on Upper Street to Lower Street where the hayfield was. We spread out the blanket and the picnic fare. We sat, under the sun, surrounded by the smell of hay, while my mother served the supper. My dad jumped off the tractor and ate with us. We packed up our picnic and went home.

Recalling this picnic makes me want to send a character on a picnic. How might I use a picnic scene?

*Could it be the beginning of a story, a story that starts with a simple picnic and then an unexpected twist, which is how Abel's Island begins. "Early in August 1907, the first year of their marriage, Abel and Amanda went to a picnic in the woods some distance from the town where they lived. The sky was overcast, but Abel didn't think it would be so inconsiderate as to rain when he and his lovely wife were in the mood for an outing." Oh, poor Abel....

*Perhaps the picnic could be the turning point. My character has a realization, figures something out, is somehow changed by something that happens during the picnic.

*Could one actually tell a story as a series of picnics, some successful, some rained on, some too buggy, some in the mud?

*Perhaps the story is one of getting ready for a picnic that keeps being pushed back by interruptions and seems never to happen.

If you send your characters on a picnic, I'd love to hear what happens.

Posted by Jacqueline at 10:43 AM
Email ThisBlogThis!Share to TwitterShare to FacebookShare to Pinterest
Labels: Abel's Island, picnics