Getting on the road 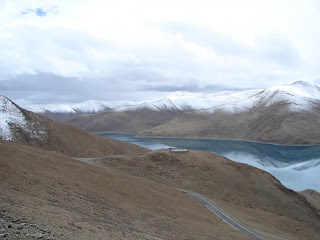 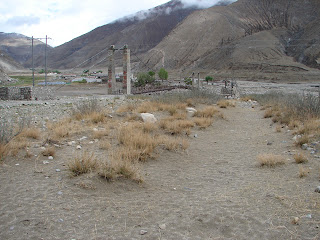 Writing about this trip, like photographing, is in some ways limiting. It is hard to get around such an overwhelming experience. And to pick out a few things to write about leaves out so much.
First--physical assessment. No headache. I wonder if part of it is lack of caffeine. No chest pains.  I don't want to be too optimistic but think I may be acclimatizing to the altitude. I hope so. I had a worry last night that I'd get to Gertze and realize I couldn't go further.
***
I'm excited about  taking off today. I think we have been quite pampered until now--flush toilets! That may end soon. I'm not sure the Metamucil is up to the challenge. And I'm worried about upping the dose. I don't want to be known as "White Lady Who Poops All The Time."

Heinrich will be a good traveling companion. It's so interesting to me that these obscure Tibetan antelopes have fascinated people all over the world.

In my information from the tour arranger, I was instructed to be sure before we left Lhasa that:
1. none of the fuel drums in the back of the truck leak;
2. there are at least 2-3 large plastic tarpaulins that will wrap around my gear in the truck to protect gear and food from leaking gas;
3. there are 4-5 shovels with sturdy handles for digging;
4. there are 2 long planks of wood in t he back of the truck that are to be used for traction when the trucks get stuck;
5. the cook has extra nozzles which attach to the propane tanks for his cooking in case some break;
6. the cook has extra stoves;
7. there are at least 5-8 cases of bottled water;
8.there are chains for the back wheels of both vehicles;
9. there are pull cables in case a vehicle gets stuck.

I remember thinking that there was no way I was going to challenge our guide with such a checklist. Heinrich didn't either.


The roads  today--after the first pass, which is an important tourist route-- were worse than I have ever seen. I'm glad I have the ear patch [for motion sickness] but think I probably need more ears and more patches. And our gas cans leaked so we were constantly engulfed in gas fumes. A long day. But we saw much beauty. I have to sort out how I am feeling about Tibetan people. We are still in areas often visited by tourists so when they see a foreigner their first response is money. [After the photo the women wanted payment, which a more experienced traveler would have known.] And perhaps that is inevitable when there's such an inequality of incomes.


Jinpa is a thoughtful guide and our driver, Mr. Lee, is very skilled. He started slow today but by late in the day was barreling right along. For some reason I don't seem too nervous with him[even though there were many switchbacks and steep drop-offs..


Heinrich walked [around Gyantse]after we arrived. I slept. But I had to. And if I don't see Old Gyantse, that's ok. I came to see chiru.


We saw many yak, sheep and goats today. Many farmers in barley fields.
****
Now of course, I wish I had taken more pictures, saved the brochures from the Gyantse hotel. I wish I had been more relaxed from the very beginning. I want to say to that nervous-looking me, "It's going to be ok. You'll be fine."

A word about the "aprons" the Tibetan women are wearing:  they are not actually aprons to protect their clothes from getting dirty, but garments, Jinpa told me later, that provide one more layer of privacy for the women, who do not wear Western style underwear.


(Continued) Standing Across from Everest


Posted by Jacqueline at 10:21 AM
Email ThisBlogThis!Share to TwitterShare to FacebookShare to Pinterest