Last week I was in Maine, visiting with my sisters Laura and Audrey and my mother. We had a great time cooking, sewing, laughing, remembering, listening to Team of Rivals.

Part of the cooking was me making rye bread flavored with pickle juice. I'd tried it once before and found it perfectly rye and sour. And this time I decided why waste a jar of pickles when I could just as easily use vinegar seasoned with pickling spices. Hmmm....

Not every idea is a good one. Not every revision works.


The vinegar totally killed the yeast. The defeated loaf shrank in on itself after I took it out of the oven. The bread had no crumb. It was sour.  It was solid, quite like cement, something you might keep on hand to stun a burglar.

So I had to revise my revision of the recipe and try again. 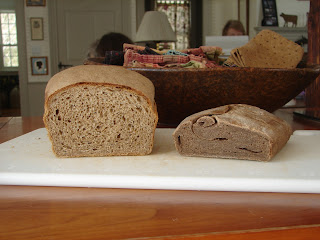 Revised version was worthy of reuben sandwiches, which were indeed stunning.

This whole wry episode reminded me of a revising experience I had recently. I've written a picture book biography of Will Allen which will be coming out this fall, published by Readers to Eaters, and illustrated by Eric Larkin. I have thought for some months that I had done all I could do with this manuscript, that it was indeed done.

I'm excited about telling Will Allen's urban farming story and excited to see what Eric Larkin will do with the text. So when I was visiting the College Community Schools in Cedar Rapids a couple of weeks ago I decided to read this story to one group of students.  I quickly realized that the manuscript was too long--not because the kids were jumping out the windows, but because it sounded clunky to my ear. It had no lightness, no smoothness. The sentences seemed stuttery to me, containing three verbs when one would do. I knew I'd have to revise.

But the funny thing is that I had read this story just recently to an audience of adults and hadn't caught the clunkiness. Why did I catch it with the kids? I'm not sure.

I cut about 300 words. The initial part of the work was done in the United Airlines lounge at O'Hare--a new place to me, with gray carpets, gray sky, nothing to focus on but my work. It was a lot easier to see the story I wanted and to pare away what I didn't want in this neutral, non-stimulating space. I was astonished at how I could sit in my chair and think about only what I wanted this manuscript to be.

There are several things I've learned from this experience.

1. we are never really done
2. read your story out loud to its real audience before you call it done
3. to see a story anew, sometimes it helps to work in a new place
4. there's something to be learned from not-quite-done stories, something to be done with bad bread